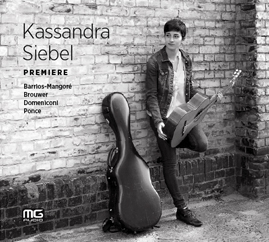 On her CD "Premiere", which appeared in December 2015, Kassandra plays pieces from Barrios-Mangoré, Brouwer, Domeniconi and Ponce.
Order via JPC (www.jpc.de)
or Amazon (www.amazon.de)

"Fortunately there are increasingly more successful debut-CD's and this piece of music of a young musician studying with Thomas Offermann in Rostock is one of them: the interpretation admittedly of known repertoire hits convince even critical listeners. The opening, "variations of an anatolian folksong" by Carlo Domeniconi is certainly effective and virtually custom-tailored for the guitar, but include also a good shot of Near Eastern authenticity, which is to be developed. This is exactly what the interpreter manages to achieve, so that she can be sure to catch the attention of the listener with this opening. Ponce's great "Sonata III" follows and stands out regarding all essential points: technique, sound and musicality. Even the "Chanson Andante" is recorded so movingly, that a better performance seems unthinkable. The "Sonata" by Leo Brouwer, is often heard, especially by newcomers – however seldom as convincing as on this album: despite the constant mood changes Kassandra Siebel keeps the compositional unity and therefore makes everything absolutely right. Barrios' gondola song "Julia Florida" sways softly and not at all sweetly, whereas the final "Vals op. 8 No. 4" by the same composer combines virtuoso fire and simple beauty. In summary it has to be noted: a really good CD, whose acquisition is highly rewarding."

By Harald Witting in AKUSTIK GITARRE 6-2016

This documentary shows how a harmonious interaction of a guitar ensemble develops. The guitarists from HMT-Rostock are playing Lotus Eaters by Andrew York.
The film clip starts approx. at minute 15.